A Camera for Extreme Photography!

I popped up to London yesterday to catch up with the nice folks at Canon, to see their spring 09 collection. One item caught my eye, which didn’t fit in with my usual scheme of things, hence posting about it here. That beasty is a Canon PowerShot D10. Now, if you don’t like its looks, don’t worry. That’s a clip on cover, so you can change the appearance if the camouflage isn’t to your personal taste (although it was a popular choice with people I’ve shown it to – I think that relates to the next bit). Love or loath the looks, you have to respect this little camera’s capabilities! Yes, you are seeing right. There it is, hanging in a bowl of water. No protective cover. No magic. It is waterproof up to a depth of 10m (which happens to be about the deepest I’ve ever dived to). Let’s see that again shall we? It will happily take shots – although you’ll probably want to find something more interesting than the inside of a bowl to shoot. The snake in the picture is the D10’s lanyard, which attaches to special fixings on the case. This isn’t your average camera, so it doesn’t have your average camera strap. The chord and fixings are robust enough to use in rock climbing, skying and diving. But what happens if it gets dropped? Let’s give that a try too shall we? Now, here’s a little confession. I’m not great at timing shots. This one is from about the 6th attempt to time it right. I was feeling bad about dropping it so many times, right up until the moment someone had the idea of filming it falling down a set of stairs (a set of stairs which had The Hoff walking up them a few minutes before). And after all that? Well, it was ready to take snaps. The lens and buttons use sealed-in-gas to ensure that there isn’t any condensation when moving between different temperatures (it will work down to -10’C). It is a 12.1 Megapixal camera (much higher resolution than my last D-SLR) and its has a 3 times optical zoom with image stabiliser.  Oh, it shoots VGA resolution video at 30 frames per second too.

A very impressive piece of technology I’ll be recommending to my skiing/rock climbing/canoeing/diving friends. They can email me the photos – I’m keeping warm in my office! 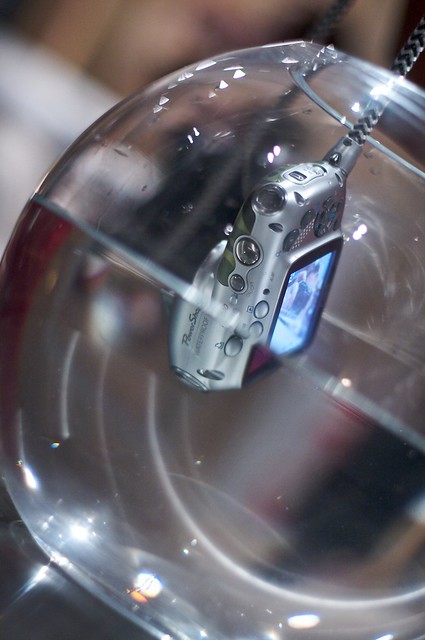