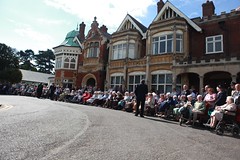 Last year I went up to Bletchley Park during the veterans’ reunion. Last year was quite a year for Bletchley. Simon Greenish, the Director of Bletchley Park, recounted the events of GCHQ succeeding in getting the government to recognise the people who worked there during the war, with the foreign secretary giving out medals to some of the veterans. The government had also promised a permanent memorial (proposed for either the National Arboretum or Bletchley Park – I’ll let you guess which venue is favoured).

Bletchley at the time was probably one of the hardest up museums in the country, but visitor numbers have been steadily growing over the last four years. For me, it is the birthplace of modern computing. If you aren’t familiar with what went on there in the 1940’s, you really should find out (see Dr Sue Black’s book). There is a wonderful computing museum, with an array of computing artefacts to see.

Bletchley Park is full of fascinating stories that were once British national secrets. With each passing year, there are fewer and fewer veterans left to tell their stories. I was very sad to hear of John Herivel’s passing last week. He was one of the veterans that I spoke with last year, and he gave a talk during the reunion. A humble and gracious man, he was a delight to listen too. 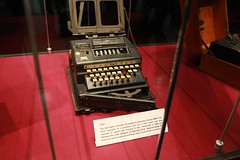 Setting the scene for Herivel’s talk: In 1940 the main challenge was to break the codes of the German Enigma machines. The power of the Enigma was its use of rotors and dynamic wiring, which meant that each time a letter on the keyboard was pressed, there were different signal products. The German army and airforce used Enigma’s with rings that were numbered, while the navy used rings that were lettered. Each ring could be set to one of 26 settings, and each day these settings were changed.

To crack the Enigma code, both the ring settings and message settings are required. The initial Bletchley Park methods for cracking the codes were based on Polish ideas, acquired before the war.  However, on the 1st of May, the Germans changed their methods, rendering the existing techniques inoperable. Alan Turing and his team had already anticipated this change, and were building a machine (The Bombe – in effect a computer) to decode the messages. That left a hole from the 1st of May to the 1st of August, while the Bombe was being built. The Enigma machine was reciprocal – putting codes into another machine with the same set up reversed the code, but there were 158 million, million, million possible keys, so cracking the codes blindly wasn’t possible. That was, until John Herivel had an idea… John Herivel, 91 at the time he gave this talk, was one of the senior code breakers, recruited from Cambridge by Gordon Welchman. The H tip (or Herivel Tip), which John conceived in Feb of 1940, was based on an intuition about a method that might work to accelerate the discovery of the codes. As John, put it, lots of ‘mights’ and ‘mays’!

The team humoured John, and give his method a go. Initially it didn’t work, but then suddenly it became effective, around the middle of May – very soon after the German forces changed their code method and the previous methods of cracking the codes supplied by the Polish failed. It was aided by a huge increase in message traffic after the Norwegian campaign, which made the H tip much more effective.

John’s method, taking advantage of errors in the way that some of the enigma machines were being set up, was used to crack messages in the critical window before the Bombes were complete. It was fortuitous timing, and made a significant contribution to the success of the code breakers. There was a sad part to John’s talk, for me at least. After the war, when his father asked him what he had done to support the war effort after university, John’s oath of silence prevented him responding – one assumes leaving his father to think he had not done much other than play maths. In fact, as noted by Winston Churchill, he was probably instrumental in changing the course of the war, together with his Fellows at Bletchley Park. So many of the Bletchley Park stories are still untold, or uncaptured. There is a superb archive at Bletchley, but sadly most of it is still boxed up and not fully catalogued. Capturing the stories and making sense of the archive is very much a race against time.

John Herivel’s obituary has been published in The Telegraph, and you can hear more of the code breaker’s stories, and find out about the ancestors of the computer you are reading this on, by visiting Bletchley Park. Rest in peace John Herivel. I am glad that I had the privilege of meeting you, so many of us own you and your co-workers a debt of gratitude that can not be repaid.

← looks like we have a vintage virus at #tvsmc
Interesting international twitter IDs from BA. I wonder what they’ll use for Italy?!? →

1 comment for “Bletchley Park – Remembering Herivel and the Herivel Tip”